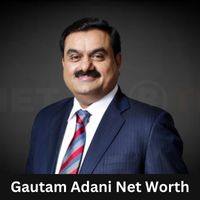 Today Gautam Adani is such a big name that everyone knows and because of this millions of people search for interesting facts related to him on the internet. So, we are presenting this article for those who are seeking information such as Gautam Adani Net Worth, Gautam Adani Annual Earnings, Income Sources, Business Ventures, and much more related to his personal and professional life.

Adani Group’s net worth increased 3 times in 2021, as a result of which the 60-year-old billionaire industrialist has become the wealthiest person in India and the 3rd richest person in the world.

In the last couple of months, we have noticed that people not only from India but from all over the world are very curious to know ‘ How Gautam Adani’s net worth has increased so fast and what he is doing because of which he became the 3rd richest person in the world today. If you are also one of them then read the article completely and you will get the answer to your queries.

Gautam Adani is an Indian billionaire industrialist who is the 3rd richest person in the world and the wealthiest person in India with a net worth of nearly $ 138 billion (According to Forbes). He is the chairman and founder of Adani Group and is known as the port king of India.

According to an article in Bloomberg published on 14th December 2022, Gautam Adani’s net worth has increased by $49 billion in this financial year. As a result of which he became the third richest man in the world leaving behind Bill Gates and Warren Buffett as well.

Gautam Adani came into the business in 1981 when joined his elder brother Mahasukhbhai Adani’s plastics unit in Ahemdabad. He used to manage the operations over there which later became the global trading gateway for Gautam Adani.

His journey started from here and gradually Gautam expanded his business. Today, Gautam Adani plays a huge role in shaping the country’s economy as he diversified his funds in numerous businesses and created millions of jobs for others.

Thanks to Adani’s Ports profits the net worth of Gautam Adani has crossed a whopping $138 billion as of December 2022. Gautam Adani’s wealth has magically increased in the last few years. we have given a table below to make you understand ‘ How Gautam Adani Net Worth has grown in the last four years.

The contribution of company stocks is very huge in enhancing the wealth of Gautam Adani. During the last few months, there has been a tremendous market rally in the stocks of Gautam Adani’s companies. The 60-year-old billionaire industrialist runs seven companies under the Adani group with a combined net worth of nearly $110 billion.

The stocks of these 7 companies have shown significant growth. Please have a look at the table below in which we have shown how the share price of the listed entities of the Adani group has increased since January 2021.

When it comes to Gautam Adani’s educational background, he did his schooling at Sheth Chimanlal Nagindas Vidyalaya. later on, he was admitted to Gujarat University for a bachelor’s degree in commerce.

He dropped out after the second year because he was eager to try his hands at the business. He proved his decision right by putting his blood and sweat into his business and today, he comes among the list of the top 5 richest and most powerful businessmen in the world.

As per the latest updates of Forbes, the estimated net worth of Adani Group is speculated nearly $138 billion which had been earned from different business verticals and company stocks.

In this financial year, Gautam made nearly $49 billion from his port business which brought him to the 3rd position in Forbes’s top 10 richest industrialist list.

It is difficult for me to accurately estimate the net worth of Gautam Adani in Indian rupees as it can fluctuate over time due to various factors such as changes in the value of his assets, investments, and business ventures.

Additionally, it is important to note that an individual’s net worth is often private and not publicly disclosed, so it may not be possible to accurately determine the exact amount. It is worth noting that Gautam Adani is a successful businessman and entrepreneur who is the chairman and founder of the Adani Group, a conglomerate with interests in various sectors including energy, resources, logistics, and infrastructure.

But estimated Gautam Adani Net Worth in Indian Rupees is ₹10.94 lakh crores.

Who is Gautam Adani?

Gautam Adani is an Indian billionaire industrialist who is the chairman and founder of Adani Group.

What is the net worth of Gautam Adani?

According to Forbes, Gautam Adani’s total net worth is nearly $138 billion which he made from 7 different companies under the Adani Group.

Who is the wife of Gautam Adani?

Gautam Adani married Preeti Adani who is an Indian businessperson, dentist, philanthropist, and chairwoman of the Adani Foundation.

Which is Adani’s biggest company?

Adani Ports & SEZ (APSEZ) is the largest company among all seven companies of the Adani Group.